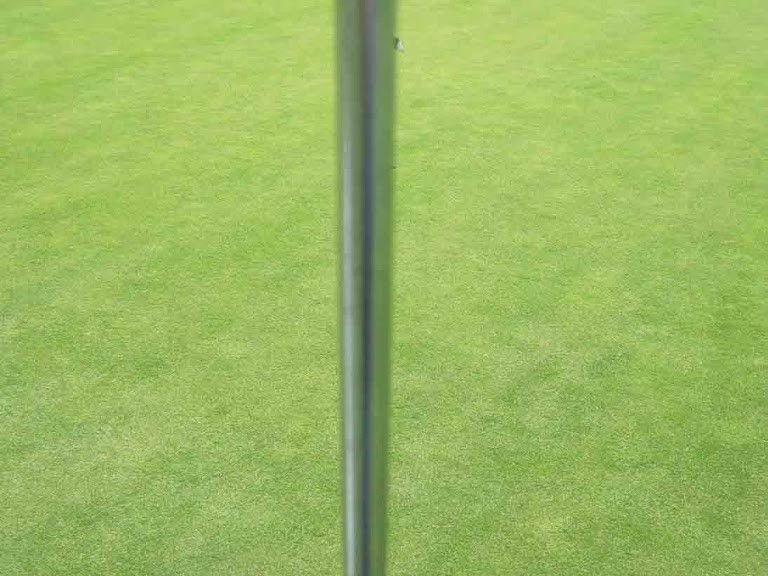 I have this thing about plumb-bobbing and putting.

Some people say it’s bunk and other golfers swear by it. They plumb-bob everything. I even saw Karie Webb plumb-bob a putt of under two feet, for cryin’ out loud. So I thought, maybe she and they are on to something. I decided to give it as fair of a test as I could.

First I read all the stuff on the Internet about how it works (there doesn’t seem to be complete agreement on this point). Then I went to the range with an Acushnet Bulls Eye putter, built in the early 1960s. This putter has the advantage of being symmetrical from front to back, so that when it hangs down as a plumb bob it hangs down 90 degrees to the earth. Most putters to day are built asymmetrically, and do not hang straight down, which makes their use for plumb-bobbing suspect from the very start.

I also took a metal track that can be used to roll a ball to determine the true contour of the green. I found a 12-foot putt with three inches of break from left to right. This is a good test putt for this experiment, because many golfers looking at it would not be certain that this putt would indeed break to the right. The idea of plumb-bobbing is that the putter would make the direction of the break clear in cases like this. I tried closing my dominant eye just to see what would happen. Both the hole and the ball appeared to the right of the shaft, which is what I expected (below). My 13-year-old grandson was with me. He tried the same procedure and he couldn’t get it to work, either. With only his dominant eye open, the shaft covered the ball and the hole. There was no indication of break.

One caveat of plumb-bobbing is that it works if there is only one break in the line of the putt. When I rolled the ball down the metal track to find the direction and degree of the break, the ball rolled on a continuous curve to the right, so there was no problem on this point.

So, I tried, and I couldn’t get it to work, but I’m still open to the matter. If you plumb-bob and it works, please write a comment with a detailed description of how you do it and how you interpret the visual information you get.

5 thoughts on “Plumb-Bob Putting: Does It Really Work?”