Everybody knows you should hit the ball first, and the ground second. Well, if you didn’t know that, you do now.

That means the bottom of your golf swing arc must be in front of the ball, not underneath it, and definitely not behind it (that’s called hitting fat).

These pictures show what that means.

Here’s an easy drill to learn how to do that. You need to be on a mat, without a ball.

Lay a tee on the mat out of the way of the club path, and pointing to where the bottom of the ball would be. Look at the spot ahead of the tee and aim for hitting the ground with the sole of the club on that spot with your swing.

If you didn’t hit the spot, figure out what correction to make. Once you start hitting the spot, repeat the drill over and over. This is the swing that hits those rockets that make you wonder, How did I do that? Now you know.

You need to do this on a mat for two reasons. You can brush grass tops and think you hit forward of the ball when you really didn’t, but more because when you do this on a mat, you can feel and hear where the club hit the ball and the ground.

The feel you are aiming for is of the club impacting the ball and the ground almost simultaneously. I know you have felt this before.

We all know that when the ball is on the ground, we should hit the ball first and the ground second. The wrong way to make that happen is to deliberately guide the club into doing that with your hands. That just interfered with my swing as it went through impact when I did it that way.

So I’m trying something else now. I get a fairway wood, and set up, drawing a line in my mind where the leading edge of the clubhead is on the ground. Then I take a swing and make the effort with my swing, not my hands, to let the sole of the clubhead thump the ground in front of that line.

You most likely will have to adjust your swing slightly to make that happen. I couldn’t begin to describe how my swing got adjusted, so I’ll leave it up you to figure that out for yourself.

I like to use a fairway wood instead of an iron, because outdoors, I don’t make a mess on the ground with divots and get my club dirty, and I can do this indoors without damaging the carpet.

I’m still working on this, the adjustments aren’t automatic yet, so I can’t say if the effort will actually pay off. But the idea makes sense to me, so I’ll invest in it.

Nine months ago, I posted what might be the most valuable advice I have ever given you about the golf swing. It is to hit the ball first, and the ground second. If you would like to read that post again before going on, here it is.

“Ball first, ground second.” You would not be undone by making this a mantra. On every shot except the ones you hit with a driver and a putter, this is the basis of a good shot. You cannot get too good at this.

The post has a drill you can use to teach yourself this move. There are training aids that help you learn it. You might even take a lesson, which would be the best way to go about it.

There isn’t more that I can say about it, except that if you want to be a different golfer by the time the 2013 season opens, learn how to do this. It might take that long, but your effort will be worth it. It truly turns golf into a different game. 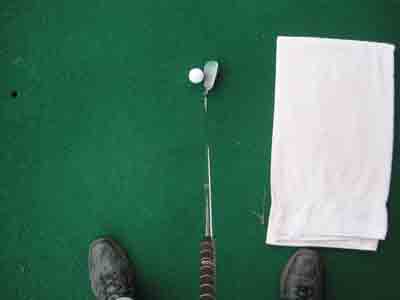 If you want to play outstanding golf, there’s one more thing. Hit the ball first, the ground second.

If your handicap is in double digits, the chances are great that you hit the ground first, and the ball second most of the time. When that happens, clubhead speed is diminished before the ball is struck, causing you to lose distance. The clubhead can get twisted, affecting accuracy.

The most effective strike is to hit the ball before the clubhead reaches the bottom of its arc. This drill teaches you how to do that.

Fold up a bath towel two times, so there are four thicknesses of towel, and place the towel about six to eight inches behind the ball. Now hit 9-irons without brushing the towel on the way down.

When you do, the ball leaps off the ground with what seems like no effort on your part. That’s the kind of shot you want to be hitting. After you get good at this drill, you can try a more challenging one which tests what you think you have learned. Take the towel away and put a tee on the ground so it points (from you) to the leading edge of the ball.

The divot that you make with your 9-iron should start on the target side of where the tee is pointing.

The 9-iron is a good club to start both drills with, but once it gets easy with that club move to an 8-iron. Work your way through your irons one club at a time, not moving to the next one until you have mastered both drills with the club you’re working on at the moment.

And I do mean “mastered.” “Pretty good” isn’t good enough. That means old habits are still kicking around. You need to practice until they are entirely gone. Don’t be surprised if it takes several months of steady practice to work through all your irons.

Of all the instructional posts on this blog, this is the one that will have the greatest positive effect on your game. All the other tips will help you to become better. This one will transform you. You’ll be playing a different game. I’m not kidding.