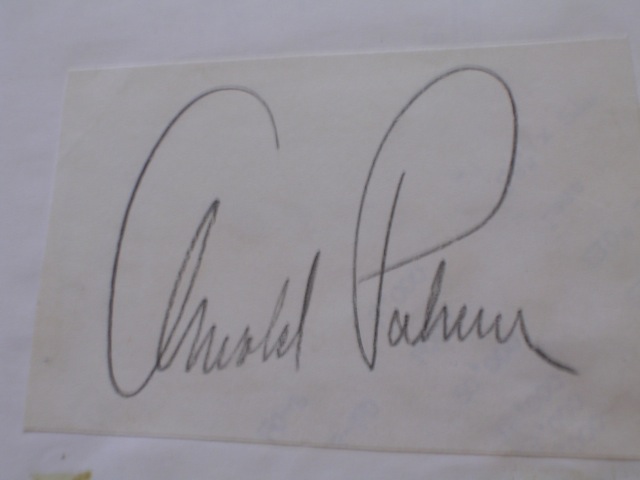 I mentioned in an earlier post that I started playing golf when I was 10. That September, my Dad asked me if I wanted to see a golf tournament – see the professionals play. I said, “Sure,” so we went to the 1960 Portland Open Invitational at the Portland (Oregon) Golf Club.

When we got there, we went straight to the range to watch the players warming up. There were caddies downrange, one for each golfer, because they had to provide their own balls back then and the caddies were out there picking them up. I was worried the caddies would get hit, but their player hit shot after shot right to them. Unbelievable.

The third tee was right next to the range, so we started following some group, I forget who was in it, and on the next hole, the second hole of tournament golf that I had ever seen, one of the guys made a hole-in-one. No kidding. What fun!

Arnold Palmer was there. He had won the Masters the year before, but was a year away from becoming ARNOLD PALMER. I knew who he was, though, and on the eighteenth hole I walked into the fairway at Pop’s urging to get his autograph as he walked from the tee to his next shot.

There were no gallery ropes in those days; you just stayed a respectful distance away when the players were hitting and then followed them down the fairway.

He was walking to his tee ball and I went up to him and asked him for his autograph. He asked me kindly to wait until he was finished playing and he would sign for me. So I went up to the green and stood a good distance away to not get lost in the crowd. I waited, and waited.

I heard some commotion from the gallery around the green, so I guess something had happened. Some applause, and everything was quiet again. Not a few moments after that, here comes Arnold Palmer, alone, walking straight for me. He had said he would sign for me, he found me, and he signed.

You can’t imagine how happy I was to get his autograph, and it took me until I had grown up to realize what he had done. He had kept his promise and he had to find me to keep it. Instead of thinking that I had left, he went looking. That’s why he’s The King. You bet I still have that autograph.