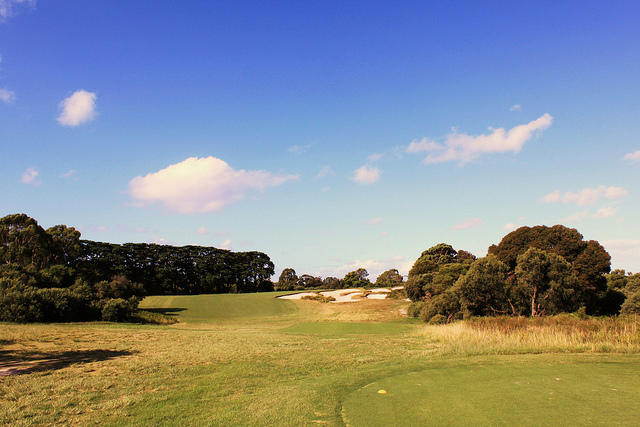 This year’s President’s Cup will be played on one of the great golf courses of the world, the Royal Melbourne Golf Club in Victoria, Australia.

The course was designed by Alister Mackenzie in 1926, who also designed The Augusta National Golf Club course. There are two courses of eighteen holes each at the club, Mackenzie having designed the East course. Alex Russell designed the West course in 1932. The tournament course is an amalgamation of the two, taking twelve holes from the West, and six holes from the East. For those of you keeping score at home, it works like this:

In former years, the same holes were used, but the routing, shown in parentheses, was different. For example, what is the first hole this week used to be the 13th hole.

Holes of note (current routing) are the fourth, sixth, and seventeenth.

The fourth hole, a 401-yard par 4, requires a blind, uphill drive directly over an imposing array of bunkers on the right. The safe shot into the fairway runs the wrong direction for a shot to the green, and most second shots will be hit from a downhill lie. The green, like all at Royal Melbourne, features subtle slopes that cannot be seen until it is too late. Four is a good score here, and five will be easy to make. The sixth hole is a very short par 4 – only 285 yards. The catch is that the drive must be hit over an enormous bunker that is built into the side of a hill. A shot out of it will be hit from a level well below the green. The safer angle crosses a valley to a crest at the same level as the tee. Miss the crest and you have a blind pitch into the green. The seventeenth is a famous hole for its deception from the tee. The fairway is so wide that it’s almost impossible to miss, yet unless the ball is put in the right spot, finding a way to get the second shot near the pin will not be easy. Even though the course is in the middle of an urban area, it has the look of being in the Australian wild. Royal Melbourne is one of the most beautiful courses in the world, I think, for that very reason. I’ll be watching the broadcast as much to look at the course as to see the competition.