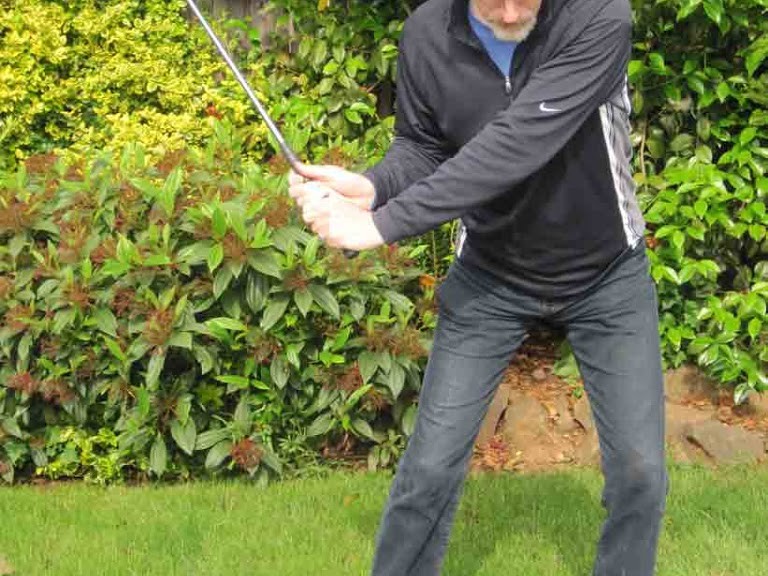 While swing changes should be a matter between yourself and your pro, there is one change I am going to recommend to you. It is very likely one that you need to make. Stop casting.
Casting is releasing your wrist set just after you start the club back down from the top of your backswing. This is too early. If you do that, you’re giving up clubhead speed and accuracy for no reason. By correcting this common error, the difference in the way you hit the ball will be jaw-dropping.

To see why, look at the two pictures. In Figure 1, the player still has his full wrist set as his hands enter the impact zone. Notice that the hands are in the same place in both pictures, but when the wrist set is maintained, the clubhead has to go over twice as far, in the same amount of time, to get to the ball. This generates extra clubhead speed with no extra effort. In Figure 2, the player is casting. As the club enters the impact zone, there isn’t much of his wrist set left. His power was used up long ago and the accuracy of the strike is in question, too. Casting is one thing that pros don’t do. They retain their wrist set for as long as they can. A better way to put it would be that they don’t let that angle go until the momentum of their swing naturally releases it. That’s what the release is. It’s the speed of the swing building up to the point where the wrists can no longer hold their set. They let go of the angle and the club lashes into the ball.

To learn how to hold on to the set, swing up to the top at your usual speed, and swing back down now very slowly until your hands are hip high. Concentrate on maintaining that angle between your left forearm and the club shaft. Don’t let it change one bit. Slowly swing from there back up to the top again and back down to hip level. Do this over and over so the feeling starts to take hold in your subconscious mind that your wrists don’t move. They just go for the ride. All the while, your hand, wrists, and forearms must remain relaxed so the wrists can release when it is time for them to.

After three tries at this, on the fourth try let your swing go all the way through the ball, letting your wrists release when they swing past hip level. (See also Your Wrists at Impact)

The wrong way to stop casting is to try for a “late hit” and hold onto the angle for dear life for as long as you can. What frequently happens is that the wrist set is held for too long. The clubface is still open as it reaches the ball, resulting in a tremendous slice.

There is no such thing as a late hit. Get that phrase out of your mind. Casting makes you hit early. A relaxed swing with a maintained wrist set delivers the hit on time.

While you’re practicing this, don’t get caught up in what the angle of your wrist set is. Ninety degrees would be nice, and some touring professionals have even a smaller angle. If you can’t get to ninety degrees, that’s OK. Don’t force yourself to go beyond that your flexibility allows you to do. This is a professional move, but it must be based on your physical capabilities.