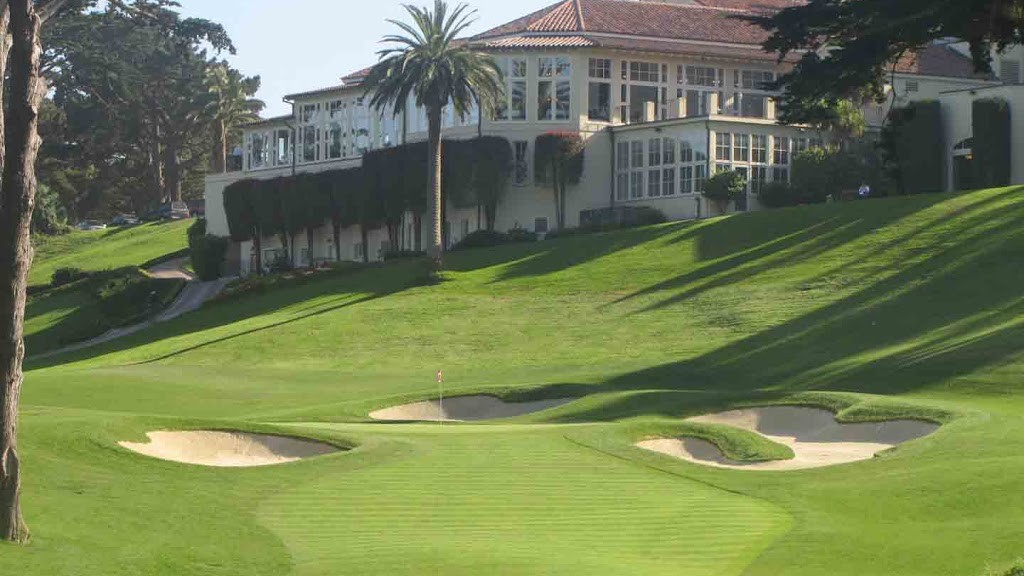 Winner: Webb Simpson by one stroke over Graeme McDowell and Michael Thompson

For the fifth time, the U.S. Open will be played at the Lake Course of the Olympic Club in San Francisco, but it will be a much different course than before. A devastating disease that stuck eight years go killed hundreds of Monterrey pines that lined the fairways. While that opens up the fairways, it might make things harder, not easier, because that will let in the nearby ocean wind. You might not know that Olympic was founded as an athletic club, not as a golf club. Olympic trained, well, naturally, Olympic athletes, who won medals in the early part of the 20th century. In that era as well, Olympic fielded its own football team, which played, and occasionally beat, California and Stanford. Golf came into the picture in 1918, with the Lake Course being built in 1924. As much as I enjoy the Open just for what it is, I enjoy it even more when the course is nice to look at. I can’t think of one that is prettier in itself and in the views of its surroundings than this one.

This week’s course is listed at 7,170 yards, quite short for a major championship. Because position is so important off the tee, and the fairways will be hard to hit, drivers will be the club of choice on less than half the time. This is starting to cause some controversy.

Traditionally, the U.S. Open has been the one tournament that requires the winner to play well with every club in the bag. When the driver is removed, when the Open becomes a lay-up tournament, its reputation a golf’s toughest test gets tarnished. The problem is, of course, continuing to play the tournament on yesterday’s Open courses that are just not big enough for today’s game. I would not be surprised if anyone leaves their driver at home when the Open is played at Merion next year.

It’s time to let history go and build new courses which present the challenge of an Open and which fit today’s players. It pains me to say that, too, because I grew up revering these old courses. But it’s time to move on. End of editorial.

The greens at Olympic are small, averaging 4,100 square feet in area. That’s 72 feet in diameter. Once the ball is on, it will be close to the hole. Good putters will have little advantage over good ball-strikers. Getting the ball on the green in regulation will be the challenge.

Olympic hits hard early in the round. Holes 2-5 were labeled “Quake Corner” in the 1966 Open. Holes 1 and 6 have been toughened up, so it will not be unusual for a player to step onto the seventh tee at +2 or +3. Part of the problem these holes present is the reverse camber of the fairway. #2 curves to the right, but the fairway slopes left. Number 4 does the opposite. Playing for the green on the par-3 3rd is risky. Better to play short and have the ball run on.

Number 16 is the longest hole in major championship competition, a 670-yard par-5 that curves left from the very start, all the way to the green. It is a legitimate three-shotter, but will played shorter one or two days for players to take a chance at reaching in two.

Of no real consequence, but unusual, is that players will tee off on #1 and #9 on Thursday and Friday, because of logistical problems in involved in shuttling players to the tenth tee.

Who will win? This is a shot-maker’s course. That brings Hunter Mahan to mind. Luke Donald? You might think a course requiring precision down the fairway and deft around the greens would be his cup of tea, but he has yet to step up on a big stage. Matt Kuchar? Has the game, has the mind. Dustin Johnson won yesterday, and he’s familiar with the lead in a major.

Tiger Woods? You have to hit fairways, and Woods is hitting lots of them now, but you also have to play well into and around the greens, which he hasn’t been doing this year. Don’t let his two wins fool you. Woods built up his PGA record by winning frequently on a few courses. This year he won at Bay Hill for the seventh time and at the Memorial for the fifth time. Those are essentially home games for him. So far, playing on the road has been disappointing.

I know that all the pros want to win the Masters, because champions get treated like a god for the rest of their life. I suspect, though, that that if you asked, the one they would be proudest of winning is this one. For me, the golf season leads up to this championship, and the remainder of the season is an afterthought.