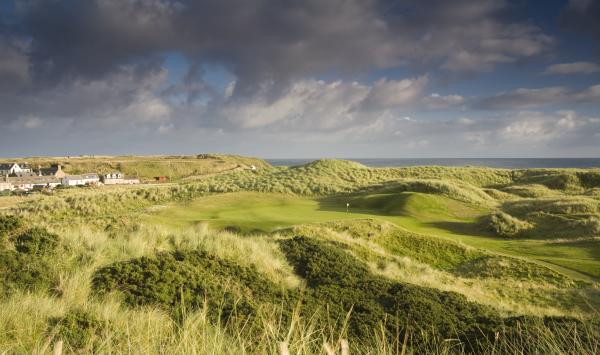 Everyone wants to go to Scotland and play the famous courses. If they don’t, they should. It’s the home of the game, it’s where golf architecture was born from a marriage between the land as it was found, and the game to be played. These five courses are not on the Open Championship rotation, but they are very bit as challenging and would comprise a wonderful itinerary if you decided to make a pilgrimage.

1. Cruden Bay. A major course on the east coast. The opening drive on a 416-yard par 4 pitches down along the coast. From there, the rest of the course winds among shaggy sandhills which make a course that should not be missed. 2. Nairn. The site of British Amateur and Walker Cup competitions, Nairn is duneland golf — fast but narrow fairways with the sea always in view. 3. Western Gailes. This course serves annually for Open Championship qualifying. Holes 1 through 11 are the essence of links golf. Hummocks, bunkers, and greens exactly where they are supposed to be, tucked between the railroad line and the sea. 4. Brora. This is the northern-most course of quality in the British Isles, designed by James Braid. Notice the fence surrounding the green. Sheep graze freely on the course, and the fence is to keep them off the green.

5. Royal Dornoch. Donald Ross grew up on this course and every architect visits it and studies it. This is the course Tom Watson said he would choose if he only had one course to play on. To read more about these courses, I strongly suggest the book, A Golfer’s Education, by Darren Kilfara. This Harvard student provides masterful descriptions of these courses and his experiences on them which he played during his year abroad at the University of St. Andrews.

2 thoughts on “Five Scottish Golf Courses You Should Know About”