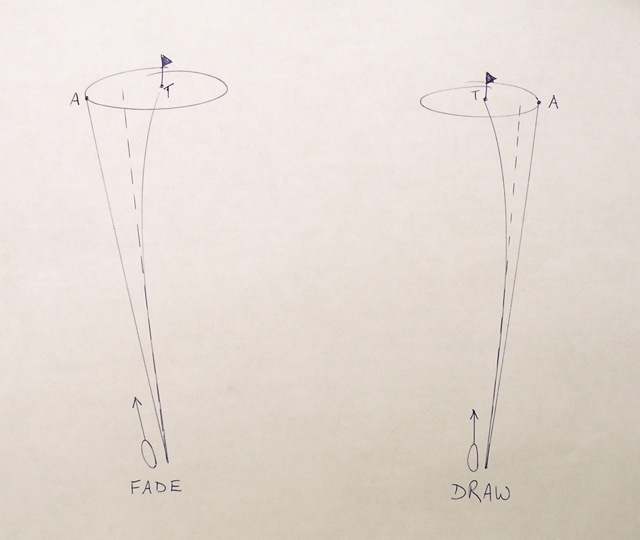 Last month I discussed the reasons why the golf ball curves. This impact geometry needs to be clearly understood by every golfer. Only then can swing problems be corrected, and can a golfer curve the ball at will to advantage.

Let us review. The direction the clubface faces at impact is the major determinant of the initial direction the golf ball starts along. The ball will curve if the clubface is not square to the path the clubhead is moving along at impact. (A left-hander’s version of this post is found here.)

To fade the ball:

The ball will start right and curve further right.

To draw the ball:

The ball will start right and curve left. Even though the clubface is open, if it is closed to the club path, the ball will draw. This push-draw is easy to hit and gets the ball in the air. It avoids the risk of smothering the ball, which might happen if the clubface is closed at address to create the draw spin.

I also assume that you have a reasonable command of hitting the ball straight. These corrections won’t work if you always curve the ball one way or the other as a normal shot.

These corrections to your setup and swing are tiny ones. The clubface needs to be opened only two or three degrees. That isn’t very much. The inside-to-out swing for the draw does not need to be exaggerated. You must experiment with the variables for both shots to determine how much of an adjustment you need.

These shots are not to be hit for the asking. You must practice them. Hit ten balls each way every time you go to the range.