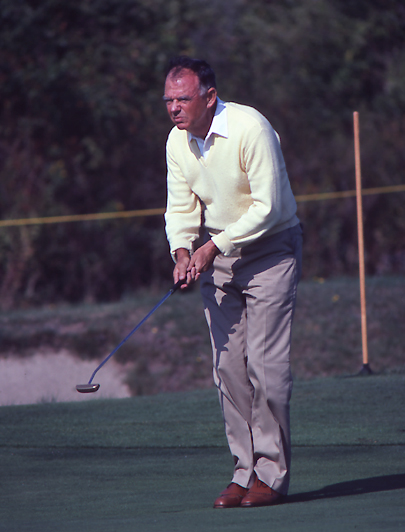 Everybody wants to have a long putter these days. Adam Scott has one. Webb Simpson has one. Keenan Bradley has one. Michelle Wie has one, though it didn’t help her with a two-footer she had last Saturday. Good grief, even Phil Mickelson played with one in a pro-am. Who’s next, Brad Faxon? Loren Roberts? Me?

Actually, I bought a belly putter about seven years ago. It’s 42 inches long with a split grip. The trouble is that I’m 6’6″ tall, and this putter doesn’t even come up to my waist. I putt pretty well with it, but I like my old Bulls Eye better.

So just like Rory McIlroy winning the U.S. Open means he is going to win every major for the next eight years (or so the golfing press would have us believe), Keegan Bradley winning the P.G.A. with a broomstick putter, and Webb Simpson winning twice with one, means that everyone is going to switch. I think it’s little early yet to say that. Both of those things.

What people are making noises about, though, is whether long putters should be outlawed. I guess it’s OK with the purists to use one as long as you don’t win anything. This reminds me of Sam Snead and the croquet-style putting stroke.

Snead, who had the yips real bad, got the idea for Bob Duden, an Oregon professional who adapted a putter so he could putt straddling the line of the putt, and facing the hole like he was playing croquet.

This was OK until Bobby Jones saw Snead was putting that way at the Masters. In short order the USGA said, No. (I’m surprised we still don’t have the stymie. Jones loved that, too.) The rule that you can’t straddle the line of your putt (16-1e) was adopted to kill croquet putting. Sam tried to get around it by putting side-saddle, but it wasn’t the same.

Croquet putting just wasn’t golf, what ever that means. People are saying the same thing about putters long enough to be anchored to your body in stead of being held exclusively in your hands. It’s just not golf. If some genius in the 19th century had come up with a croquet putter, would it be golf now?

It doesn’t matter to me. You still have to read the green, you still have to get the speed right, you have to keep your mind calm to make a smooth stroke. No putter will do any of those things for you. As long as you’re actually hitting the ball, and don’t “push, scrape, or spoon” it, that’s golf. (Can anyone tell me what it is to ‘spoon’ the ball? You pick up the ball on a concave club face and fling it down the fairway?)

Let’s find a different reason to complain about why you lost a tournament. And you know, it’s only a few touring professionals who are bothered by this. As far as recreational golfers are concerned, and they are in the VAST majority, whatever helps them get the ball in the hole faster is just fine. The few I’ve played with who use a long putter don’t seem to putt better with it, anyway, because they leave out this one key point:

The chest putter has to be anchored to your sternum during the stroke. If the end is moving around, you don’t have a chance.

I say, if the long putters are banned, (and they probably won’t be) then let’s go back to wooden woods and wound balata balls. Or wooden-shafted clubs, to make Booby Jones’s spirit happy. But until some long-shaft putting pro starts averaging 25 putts per round, enough with the sour grapes.