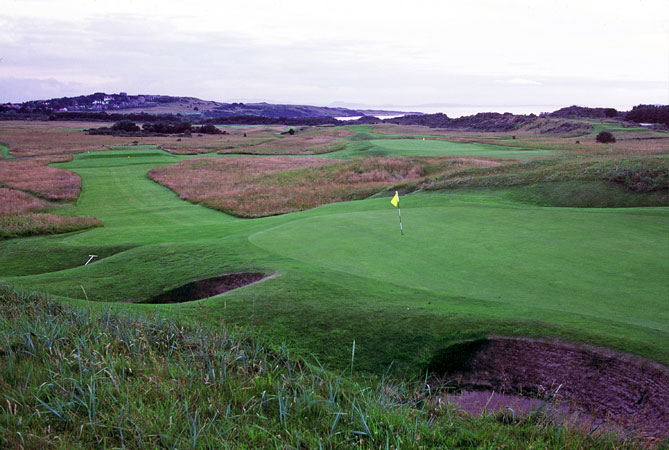 The U.S. Open is my favorite golf tournament. The Open Championship is 1A, and when I watch it, I actually like it better. Maybe only national pride keeps our Open at the top of my list.

I love the ground game, the way links golf asks you to get the ball up to the hole however you can. Imagination is king, which is the way I like to play.

The Honourable Company of Edinburgh Golfers owns the course which hosts the Open this year — Muirfield. Though St. Andrews is the older course, the Company is the oldest golf club in the world, dating from 1744. It also composed the original 13 rules of golf upon which the modern rules were founded.

Every course has its own character, emphasizing one part of the game over the others. Muirfield is a driver’s course. There is no water, no trees, no carries. Just get the ball in the fairway, or else. Another strength of the course is its bunkering. The landscape is designed to collect balls into bunkers that are intentionally penal.

Shown below is the 13th hole, a 190-yard par 3. The green is quite narrow. The bunker on the front left is six feet deep. The outward nine circles the perimeter of the course, running counter-clockwise, and encloses the back nine, which circles clockwise. Wind is another of the course’s defenses, and only at holes 3, 4 and 5, and 10 and 11 do consecutive holes run in the same direction.

Muirfield plays to a fairly short 7,192 yards. It has no hole that you might call a signature hole. Every hole is a challenge.

The opening hole is 447 yards long, but against a headwind getting on in two can be difficult. The second hole is only 364 yards long, but players will need an iron to keep the ball in the fairway, and the green has no real landing area as it slopes away from you. Combining an army of bunkers on the right side of the green with out of bounds hard on the left, what looks like a birdie hole could surprise more than a few golfers.

On and on it goes, just like that. Every shot must be carefully thought through up to the closing hole, a brute of a par 4 at 470 yards. Like at Merion, a leader nursing a one-shot lead on the 72nd tee will be examined fully.

Who is the favorite? Phil just won in Scotland. Tiger is coming off an injury and is an X factor. Rory could pop out of nowhere and have four greats rounds, but I’m not holding my breath.

What I can say is that no slackers win the Open at Muirfied. Its post-war winners are Cotton, Player, Nicklaus, Trevino, Watson, Faldo (twice) and Els. We should expect no less this year.